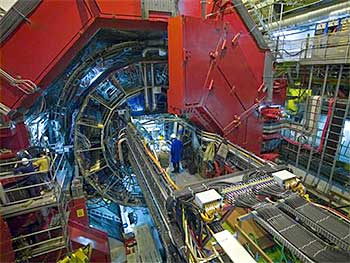 Heat up solid and you get liquid, then gas, then plasma, then — when you reach trillions of degrees — the atoms start to shake themselves apart. Scientists at Brookhaven National Laboratory in New York had set a temperature record in 2010, smashing gold atoms into each other until they reached four trillion degrees Kelvin. (Or Celsius… above a few thousand degrees, the difference is meaningless.) The result was a “quark-gluon soup,” a plasma of subatomic particles that mirrors the universe a few microseconds after the Big Bang.

In 2012, scientists at the ALICE large ion collider at CERN took this research one step farther, smashing lead ions until they reached a plasma 38% hotter. This will likely be verified at around 5.5 trillion Kelvin. (Note that because they’re dealing with energy released in an extremely small space, converting it to a strict “temperature” is tricky.)