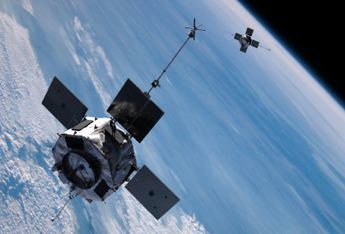 [Excerpted from Spectrums, by David Blatner]

When the U.S government shot the first global positioning satellite (GPS) into space in the 1970s, no one knew for sure if Einstein’s theories were right, but millions of dollars were at stake: If the onboard clock became inaccurate by more than about 25 nanoseconds, it would be effectively useless. However, relativity predicts that a clock traveling through space at the speed of an orbiting satellite should tick far slower than one on the ground— about 7 microseconds per day slower! That alone would cause enough of a problem, but Einstein also predicted that a clock at that altitude—farther from Earth’s space-time-warping gravity—would speed up by 45 microseconds each day. The two relativistic effects combined would cause an error of 38,000 nanoseconds each day, enough that a GPS unit on the ground would provide an incorrect reading after just two minutes.

Fortunately, like good investors, the scientists hedged their bets, including a switch on the satellite that could be remotely thrown to enable or disable corrections for relativity. It didn’t take long to realize that relativity worked exactly as predicted decades earlier: Speed and gravity affect time.

In today’s world of hyperaccurate measurements, scientists have found the same effects here on Earth. They can detect the slowing of time you experience when you ride a bicycle, or how you age faster when you climb a ladder. From our human scale, you never notice the effects, which add up to only billionths of a second over an entire lifetime. But the adjustments are significant when dealing with the ultrafast: Physicists working with atomic clocks must now correct for relativity even when they compare clocks on different floors of the same building. It’s not that one clock is more accurate than the other; each clock, just like each of us, literally steps through time differently.