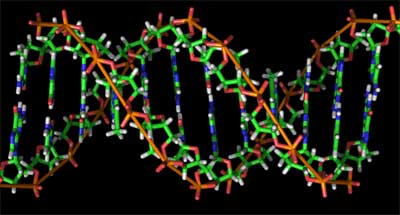 Chromosome 1 — A Supersize Molecule In Each Of Us

[“… there are more than 10 trillion cells in the human body … we find inside each cell billions and billions of atoms, bound together into molecules of water, DNA, and other structures.”  Spectrums, Chapter 2]

Molecules vary in size from the very tiny (such as a simple pair of atoms, like an oxygen molecule), to the large (such as complex organic structures).  One of the biggest molecules in nature resides in the human body. It is called chromosome 1 and consists of about 10 billion atoms.

A normal human cell has 23 pairs of chromosomes in its nucleus, each a single, very long, molecule of DNA. DNA is the material that holds genes. Two copies of chromosome 1, one copy inherited from each parent, form one of those pairs in each cell. That pair of Chromosome 1 supersize molecules contains about 8% of the total DNA in a human.  (You can learn more here.)